"Our prayers are answered not when we are given what we ask for, but when we are challenged to be what we can be."

"Wisdom comes more from living than from studying."

In German there are two words for the verb "to know" ñ kennen and wissen (pronounced vissen). The word "kennen" is used for concrete things, persons, places [= to be familiar with, to be acquainted with]. Kennen is to know with your mind. 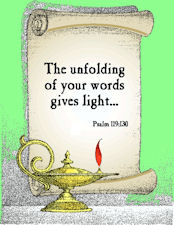 The other word "wissen" is for abstract items, concepts, ideas [= to have an understanding of, to have knowledge of]. Wissen means to know at the deepest level of your being.

Regarding the Word of God, many people know the Bible in a "kennen" kind of way. They know intellectually. They accept it.

The problem is that so few people know the Word of God in a "wissen" kind of way, down at the deepest level of their being.

The proof of knowing is in the way they live. Too often men and women do not translate the Word of God into their daily lives; they do not allow the Word of God to take hold of them at the depths of their being. They are familiar with the Word of God, acquainted with its teachings, but simply do not understand the Word of God.

The Wise do Sooner

"The wise do sooner what fools do later. Both do the same; all that differs is the when. The former act at the right moment, the latter at the wrong.ÖThere is only one good way to see the light: as soon as possible.ÖThe wise size up immediately what has to be done, sooner or later, and do it with pleasure, enhancing their reputation."

"Fortune ñ Fame ñ Power ñ Pleasure. When it comes to temptation, these are the biggies.ÖThese four represent the weakest links in our chain of resistance."

"Pride is the downward drag of all things into an easy solemnity. Seriousness is not a virtue. It would be heresy, but a much more sensible heresy, to say that seriousness is a vice. It is really a natural trend or lapse into taking oneís self gravely, because it is the easiest thing to do. It is much easier to write a good Times leading article than a good joke in Punch. For solemnity flows out of men naturally; but laughter is a leap. It is easy to be heavy; hard to be light."

"I think of people I met in the past.Ö

Many, many people. Where are they now?

Some are still friends, some just a Christmas card; others no longer meet but never forgotten.

Not every friendship lasts forever; we move house, school and job, we drift away from people.

But every memory of friendship shared, even for a short time, is a treasure, like sunshine and warmth in our lives, like a cool breeze on a humid day, like a shower of rain refreshing the earth.

Thank you, Lord, for the gift of friendship at every moment of life."

"The spiritual teachers universally recognized as ëgreatí did not give commandments nor did they impose their own way of life on others.ÖAnd so they invited their followers to question the handed-down maps by making available Ötheir own stories. Rather than trying to tell their listenersí stories, rather than imposing interpretation, the sages and saints told the kind of stories that invited identification. For they understood what the ancients had discovered: The best way to help me find my story is to tell your story."

"The climb to the top is arduous and long. People become exhausted, frustrated and disenchanted. They often are tempted to give up. Leaders must encourage the heart of their followers to carry on.

People do not start their work each day with a desire to lose. It is part of the leaderís job to show them that they can win."

"For a stalk to grow or a flower to open there must be time that cannot be forced; nine months must go by for the birth of a human child; to write a book or compose music often years must be dedicated to patient research. To find the mystery there must be patience, interior purification, silence, waiting."

The Worth of Our Lives

He proceeded to crumple the $20, and asked, "Who still wants it?" Still the hands were up in the air. "Well, he said, "what if I do this?" And he dropped it to the ground and started to grind it under his shoe. He picked it up, now crumpled and stomped on. "Now, who wants it still?" And the hands went into the air.

"My friends, we have all learned a very valuable lesson. No matter what I did to the money, you still wanted it because it did not decrease in value. It was still worth $20. Many times in our lives, we are knocked down, crumpled, and ground into the dirt by the decisions we make and the circumstances that come our way. We feel as though we are worthless. But no matter what has happened or what will happen, you will never lose your value. Dirty or clean, crumpled or finely creased, you remain priceless to those who do love you. The worth of our lives comes not in what we do or who we know, but by who we are. You are special ñ donít ever forget it."

Far into the Arabian desert, so far that few have seen it or even know of its existence, stands a small fortress. In silence and isolation, the sanctuary rises out of timeless sands, ready to offer safety and provisions to anyone who might come upon it.

It is said that Thomas E. Lawrence, better known as "Lawrence of Arabia," found refuge and sustenance in the little fortress on numerous occasions. When under attack, often against overwhelming odds, he would make his way to the remote desert sanctuary. It was his life-support, providing him with food, water, safety and opportunity to regroup, so that when he was ready he could face the world again.

At times, each of us longs for a sanctuary far removed from current challenges and busyness. However, you do not have to go off to a far away place; you have your own sanctuary ñ always ready, always waiting. It is the safety, the protection, the peace and the comfort you experience when you enter into conscious communion with God.

Prayer opens the door through which you enter a sanctuary of strength and safety, protection and renewal. Times of prayer, of conscious contact with God, provide you with sustenance and renewed vigor so that when you are ready you can face the world again ñ uplifted, refreshed and empowered. 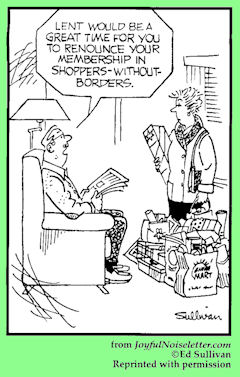