"It takes so little to let others know they are appreciated, but such acknowledgment is greatly valued. A thank you, a phone call, or a card can brighten someone’s entire day.

Make a point of recognizing the good that others do and telling them about it. Showing appreciation is a great habit to develop."

"Let us not look back in anger, or forward in fear, but around in awareness."

"Trials, temptations, disappointments – all these are helps instead of hindrances, if one uses them rightly. They not only test the fibre of a character, but strengthen it. Every conquered temptation represents a new fund of moral energy. Every trial endured and weathered in the right spirit makes a soul nobler and stronger than it was before."

"To give real service you must add something which cannot be bought or measured with money, and that is sincerity and integrity."

"You’re alive. Do something. The directive is life, the moral imperative, is so uncomplicated. It can be expressed in single words, not complete sentences. It sounds like this: Look. Listen, Choose. Act."

We Are the Beloved

"When God gets our attention and we accept His grace and forgiveness, our feet are set on a new path. My brief prayer inviting God to enter my life was really only the beginning of my journey. It gave me new priorities and a new way of looking at myself. Although I’m still the same person with the same talents He gave me, I now see that I can use those talents to bring glory to His name. And in the process, I am able to become the best person I can be.

"Your new destination, then, is really a new purpose in life. By purpose, I mean your reason for being – something toward which you are always striving. A purpose is different than a goal in that it does not have a beginning or an end – it is ongoing. It gives meaning and definition to our lives."

"Eternal vigilance is the price, not only of liberty, but of a great many other things. It is the price of one’s own soul."

"Do not walk through time without leaving worthy evidence of your passage."

"A retentive memory may be a good thing, but the ability to forgive and forget is the true token of greatness."

"The task of leadership is not to put greatness into humanity, but to elicit it, for the greatness is already there."

"Adventure isn’t hanging on a rope off the side of a mountain. Adventure is an attitude that we must apply to the day to day obstacles of life – facing new challenges, seizing new opportunities, testing our resources against the unknown and in the process, discovering our own unique potential."

A Sense of Wonder

"At the heart of all spirituality is a sense of wonder and surprise, the awe that accepts that it can only marvel and delight – whether at the magnificence of a landscape, the sublimity of a symphony, or the incomprehensible beauty of self-sacrificing love."

Plank in My Eye

George was a relatively new member in his parish. The pastor knew he was still recovering from a very painful divorce, but had known none of the details. For whatever reason, George thought it important for his new pastor to hear the story.

"As you know, I teach history at the university," he began. "My education has shaped me as a very open-minded and tolerant man. I encourage my students to open their minds to new ideas, and even open their hearts to people who are different from them. I pride myself on being an understanding, tolerant person.

"Unfortunately, what I discovered during my divorce and the counseling which followed, is that there is nothing so narrow as believing you are open-minded; nothing so misunderstanding as assuming you are an understanding person; no one so unaccepting as the one who is absolutely convinced he or she is accepting.

"I’ve had to face the fact that I was a very difficult man to live with. The very fact that I thought I was so loving toward my wife blinded me to my unloving behavior."

There’s a folktale about a young man who aspired to great holiness. After working some time to achieve it, he went to see his village priest.

"How so?" asked the priest.

"Well," answered the young man, "I’ve been practicing virtue and discipline for some time now, and I’ve become quite proficient at them. From the time the sun rises until it sets, I take no food or water. All day, I do hard work and sacrifice for others.

"If I have temptations of the flesh, I roll in thorn bushes or in sorrow. And at night, before bed, I practice the ancient monastic discipline and administer lashes to my bare back."

The priest was silent for a time gazing out a window. Slowly he turned toward the young man and pointed out the window to a mule hauling a tinker’s wagon.

"I’ve been watching that mule pull that wagon," said the priest. "It doesn’t get fed or watered from morning to night. All day long it works hard for people. Sometimes I’ve noticed it brushing against bushes or rolling in the snow when unharnessed, and I’ve frequently seen lashes of the whip strike its back. 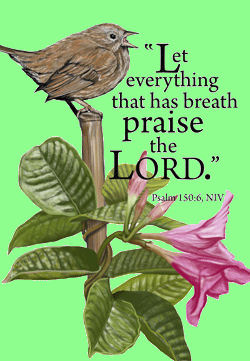 Next planting is in September!